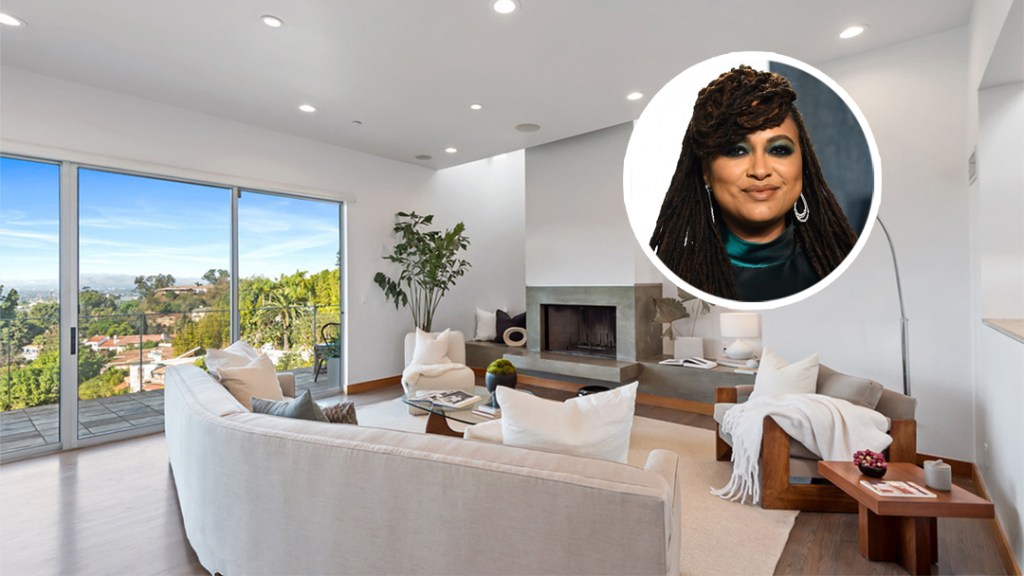 Now that she’s settled into her new $10 million Los Feliz compound, it’s only natural that Ava DuVernay is ready to offload her other L.A. property, this one a far more modest place tucked into the tightly packed hills of Hollywood, where homes enjoy dramatic views of the city skyline. The prominent filmmaker acquired the low-slung house in May 2017 for just under $1.9 million, per records, a healthy amount under the current $2.475 million ask.

Built in 1961, the midcentury modern underwent a significant renovation in the ’80s, and again in the 2000s. DuVernay appears to have added custom upgrades of her own, as befitting a showbiz mogul; inside the 3,600-square-foot structure are clean-lined, glitz-free interiors defined by brown hardwood floors, wide banks of glass pocket doors, and recessed LED lights.

The main level offers an eat-in kitchen with ash grey cabinetry, stainless appliances, and dark stone countertops. That no-nonsense theme carries over to the powder room and a great room, where there’s space for a dining area and separate living area arranged around a fireplace. A substantial patio, one of three on the premises, spans the home’s full width.

There are a total of 4 bedrooms and 5.5 full baths; the master suite is kitted out with its own sitting room and a sunkissed bathroom equipped with dual vanities, a tiny soaking tub, and a glassy shower with its own built-in bench seat. One of the other three bedrooms is staged as a home office, and there’s also a bonus room — possibly a fifth bedroom — that could also function as another office, an art/music studio, or as a home theater.

Like many Hollywood Hills properties, the house has almost no yard and sits hard up on the streetfront, though the place remains relatively private. A long, featureless wall shields homeowners from lookie-loos, and there’s a one-car garage for discreet egress and ingress, plus deeded off-street parking for an additional two or three vehicles.

Born and raised in Los Angeles, DuVernay began her career as a journalist before establishing her own PR firm in the late ’90s. The UCLA grad, now 48, first explored filmmaking in the mid-aughts, initially self-funding her own movies. It was her second feature film “Middle of Nowhere,” that made her the first Black woman to win the director prize at the 2012 Sundance Film Festival.

2014’s critically-beloved “Selma” significantly heightened DuVernay’s public profile, scoring her a Best Picture Oscar nomination; from there, she helmed the Emmy- and BAFTA-winning Netflix production “13th,” and the 2018 box office bomb “A Wrinkle in Time.” In late 2018, she signed a whopping $100 million deal to develop content for Warner Bros. television, putting her among an elite crowd of filmmakers to ever reach the historic nine-figure deal mark.