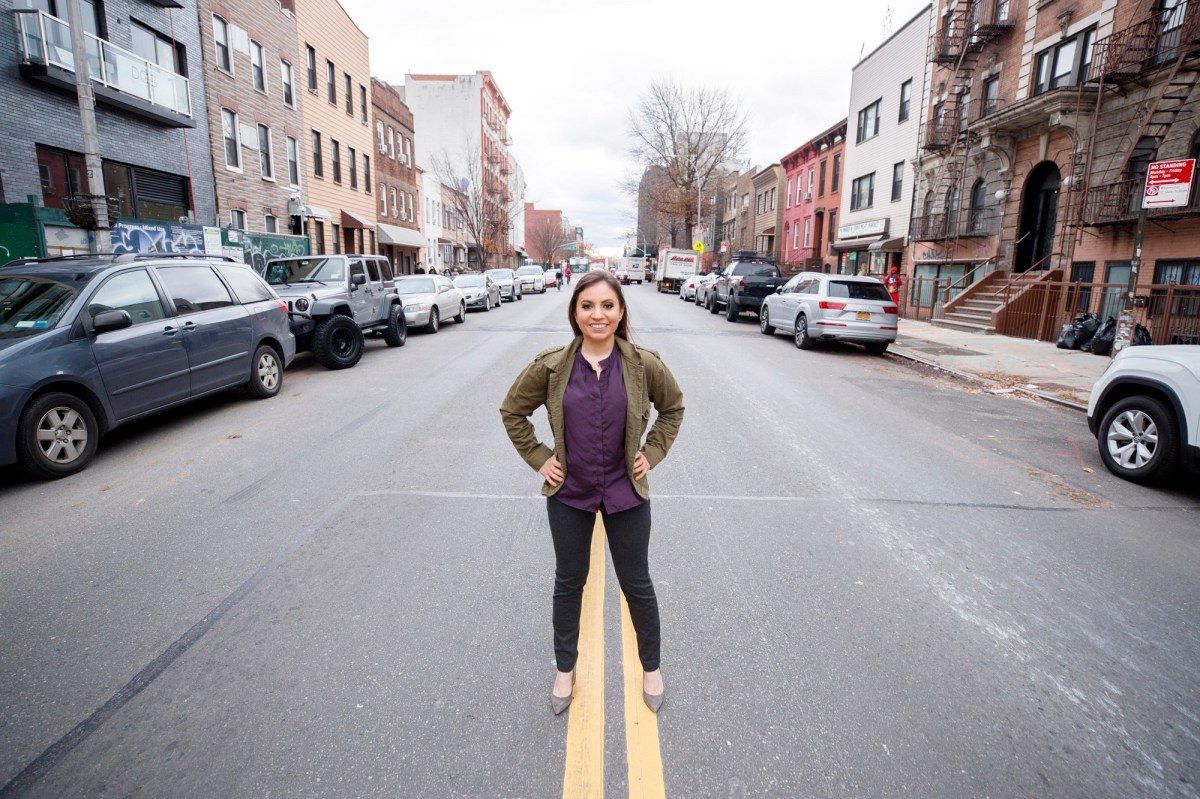 Maria Rivera-Diaz is living on the edge.

After a year occupying a co-sharing space in a centrally located Williamsburg apartment building, the 31-year-old lawyer and student recently decided to set out for the very frontier of her adopted neighborhood.

When she moved from Atlanta to Williamsburg in 2019, she was looking for somewhere “cool and artsy,” Rivera-Diaz told the Post.

The hipster mecca of Williamsburg, a neighborhood that was for decades synonymous with creative class culture, seemed an obvious choice.

But large-scale development has now displaced many of those bohemian perks from the heart of the neighborhood. Williamsburg’s once-edgy waterfront is now home to billion-dollar developments and luxury apartment towers with cruise ship-like amenities.

Bedford Avenue, the neighborhood’s main thoroughfare, now boasts retail banks and a Dunkin’ Donuts rather than dive bars and thrift shops. Worst of all, the prime areas of Williamsburg are now overrun with tourists and Manhattan-types.

For a taste of 2007’s Bedford Avenue, many young transplants like Rivera-Diaz are house hunting far from the East River on the very fringe of the neighborhood and in nearby East Williamsburg.

Rivera-Diaz, for instance, found a new home on the western edge of Metropolitan Avenue near the Grand Avenue L train stop, a slice of Williamsburg that still oozes cool.

“The mall-ification of Williamsburg with massive towers and huge buildings, a lot of people didn’t come to Brooklyn for that,” said Molly Franklin, a realtor with Corcoran who specializes in the neighborhood. “The creative class started moving south and east.”

But even the borderland between Williamsburg and East Williamsburg — which is generally said to run along Bushwick and Woodpoint Avenues — is no longer safe from the commodification of cool.

The industrial-chic area is currently experiencing a fresh surge of residential development, as large numbers of young buyers and renters flee over-developed parts of Brooklyn.

More than a dozen new and pre-development boutique condo buildings — including 175 Jackson, 52 Maspeth and 83 Humboldt — with asking prices from $650,000 to $1.9 million, are beginning to arrive in the area.

New rentals, like the 35-unit Milo at 885 Grand in East Williamsburg and 116-unit building 222 Johnson (which sits on the Williamsburg side of Bushwick Avenue) landed in the area in 2019 and 2020, respectively.

Further evidence of change can be seen in housing costs.

The median asking rent between East Williamsburg and Williamsburg has narrowed to a margin of only $200, from $2,800 to $3,000 in 2020, according to data from StreetEasy.

The margin between median asking sales is similarly thin. The median ask in East Williamsburg is now $1.12 million while it’s $1.3 in Williamsburg.

“With social distancing, people are increasingly migrating out of Manhattan and the Williamsburg waterfront,” said Steve Ferguson, founder of Saddle Rock Equities and the developer of The Devoe, a brand new 10-unit boutique condominium on a quiet tree-lined street on the easternmost border of Williamsburg. “People are on the hunt for a low-density living experience without having to forego amenities or neighborhood.”

Vincent Leung, 39, and his wife Candice Sham, 37, are prime examples. They bought their first NYC apartment at The Devoe last month.

“We’re first-time buyers, so we liked the idea of a fresh start.” said Leung, a financial tech consultant, of his new studio apartment near the Graham Avenue L train stop, where studios are priced from $600,000 and two- and three-bedrooms top out at $1.75 million. “East Williamsburg has the same vibrancy as Williamsburg. It’s secluded, but close to the cultural center. It’s the best of both worlds.”

And with shiny new buildings comes corporate retail and dining.

The beloved pizzeria Roberta’s — oft-claimed as Bushwick territory, but technically located in East Williamsburg — is arguably the neighborhood’s first destination restaurant, hitting the scene in 2008.

But in recent years, the Robert’s pizza empire has ballooned into a chain, with locations near Domino Park on the Williamsburg waterfront and in Los Angeles — the brand even has a line of grocery store frozen pizzas.

Others have joined its ranks as trendy destination for moneyed Manhattanites and tourists, including Win Son for contemporary Taiwanese with a new bakery offshoot catty-cornered on Graham; high-end butcher shop Meat Hook and its new sister restaurant Cozy Royale; and Carthage Must Be Destroyed, a funky Australian concept whose dining room inside a massive warehouse is awash in appropriately trendy millennial pink.

Even über-cool Brooklynites are being forced to acknowledge the appeal.

In September, Kayla Rakower, a 26-year-old user experience designer rented a two-bedroom, 800-square-foot apartment in a building that’s about 10 years old on Meserole Street — a stone’s throw from East Williamsburg — for $2,900.

It ticked all the boxes for her “new normal of being comfortable living alone and working from home.”

“Bushwick is way funkier with graffiti and a more interesting bar and restaurant scene,” she said. “[But] East Williamsburg has charm. There’s lots of hole-in-the-wall places, it feels safe and it’s easy to get to other neighborhoods.”